How Coin Dies are Created using a Pantograph. Essentially it's kind of like a key cutting machine and record player in one, but not really since it also scales the size of the reproduction. This probably doesn't make a whole lot of sense so let me let Wikipedia explain it.

A pantograph (Greek roots παντ- "all, every" and γραφ- "to write", from their original use for copying writing) is a mechanical linkage connected in a manner based on parallelograms so that the movement of one pen, in tracing an image, produces identical movements in a second pen. If a line drawing is traced by the first point, an identical, enlarged, or miniaturized copy will be drawn by a pen fixed to the other. Using the same principle, different kinds of pantographs are used for other forms of duplication in areas such as sculpture, minting, engraving and milling.

Did that help? Or make it worse

It's just the fancy machine that takes the large epoxy mold of the art and carves it into a coin die, we're about to get much more into it. 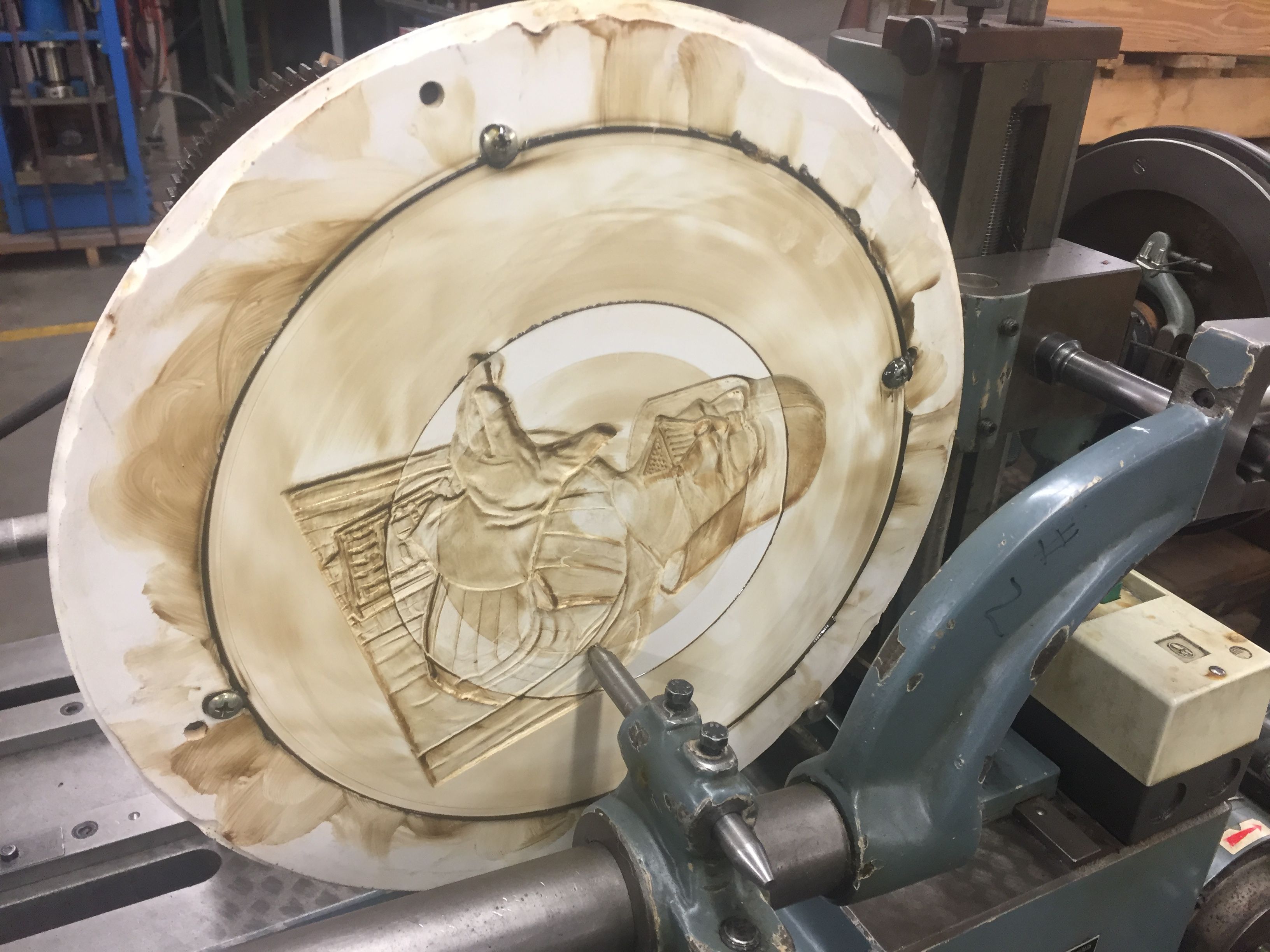 This is the large epoxy mold of the final coin design, it is created by taking an impression of a plaster that is hand carved by a sculptor. This is then reproduced to the much smaller coin die.

When the machine is activated it spins and reads the first pattern then cutting it into to whatever smaller scale is being used of the coin die. It has a series of pulleys, gears, tensionors and motors that detemine the speed of spin, depth of cut and reproduced size. This same machine and same plaster can be used to create a die as large as 64mm for a 5 ounce silver round to as small as 8mm for a 1 gram gold round. This process can take up to several days of spinning on the pantograph and takes a master's touch and lots of technical expertise to ensure the heads are mounted, sharpened, adjusted and chosen just right. 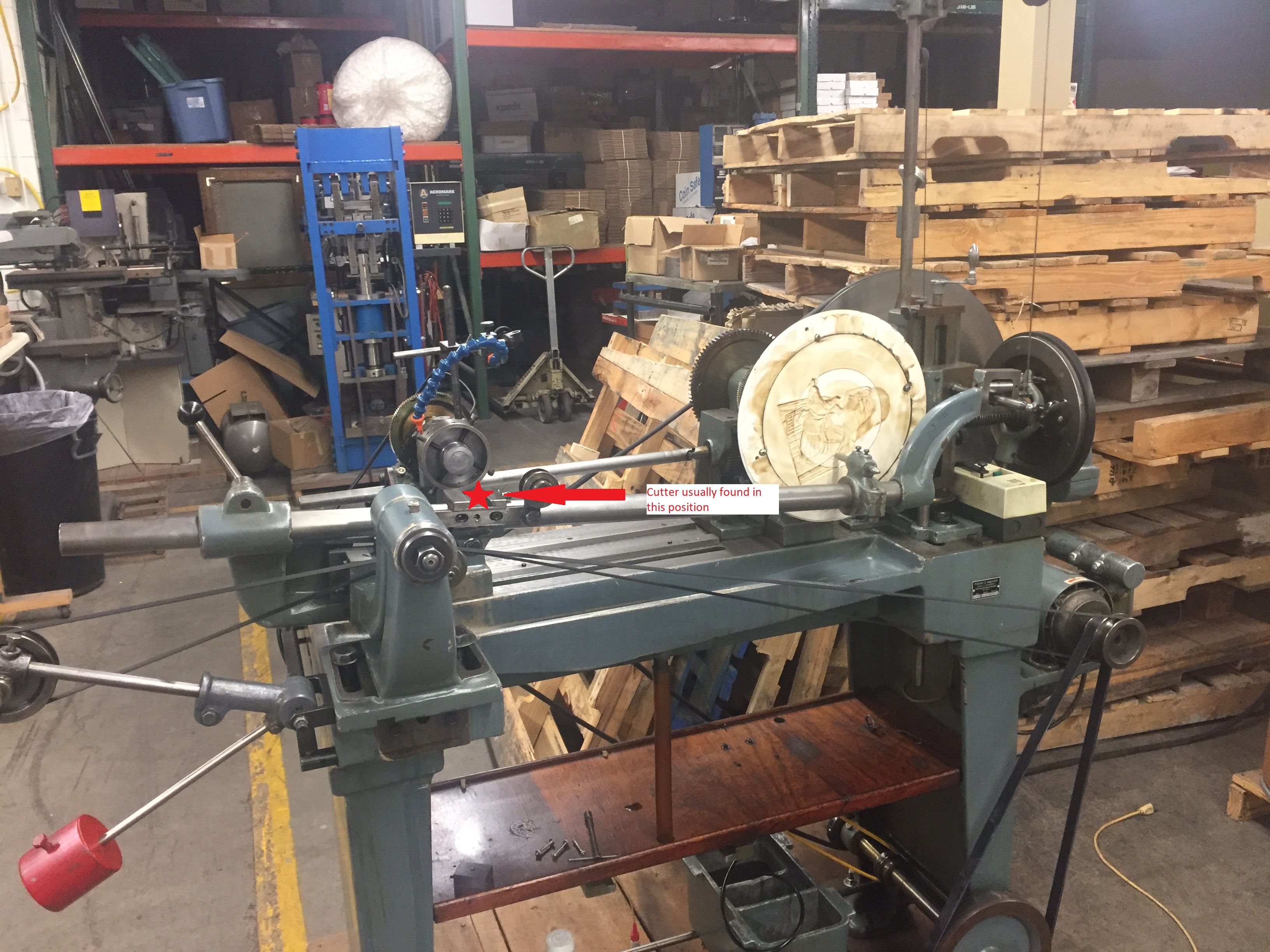 Most of these pantograph machines are very old and new ones are no longer constructed since most have been replaced with CNC machines or laser engravers, although most of the big government mints are still using pantograph machines to create there coin dies. This was a topic of discussion with our minting team and they provided use with some great insight. Although these new machines are highly sophisticated, when they are programmed using the 3d vector files it's never a fluid as the human sculptor who makes the plaster used as the template(more on this step in another post). It was explained that when a master sculptor carves the plaster the lines and contours are created fluidly and perfectly and the pantograph is the only way to replicate that onto the die. When the computer follows the rounded surfaces it break it down into a series of way points. In earlier machines this left a stepped pattern of cuts, this has improved and it not connects dots to a series or way points, but it never really follows the same fluid movement a human is able to create. I used all my sweet graphic design skills to make this little image to try and explain it, they was it was explained to us.

Interestingly I noticed this exact same phenomenon when I zoned in on my awesome artwork above. 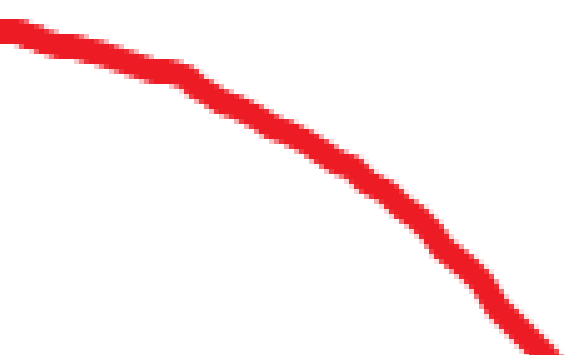 Anyways here's hoping you found this interesting and I'll explain more about other steps in the coin making process in other posts.

Comments will be approved before showing up. Creating a Coin Die: Turning art into a mold! Where to Buy Silver? Silver Insurance: To buy or not to buy?

Sign up to get exclusive insider info about new releases, special offers and more! The reverse of this coin bears a image of a seductive, tempting Succubus.

The succubus coin is much more than just a cool image of a pretty girl (although it certainly is). The succubus image has a much deeper and metaphorical meaning to us. It represents the struggle against any form of alluring temptation that may be wrapped in a seductive package but could ultimately lead to your demise.

In traditional folklore the succubus was a beautiful seductive demon who would seduce men, once these men were seduced their health would deteriorate and they would ultimately die. It's possible you could relate to a relationship of this nature where a partner was slowly drawing the life out of you, but on an even deeper level we feel the temptation and deteriorating effects can apply to so many aspects of one's life, not only relationships.

We also feel the succubus can serve as a constant reminder to understand the deeper meaning of anything and ensure we are not blinded by it's beauty or allure.

Lastly we also draw great strength knowing we have overcome challenges and temptations in our lives to breed character and form our personalities. This ultimately led us to our first release titled "Temptation of the Succubus"